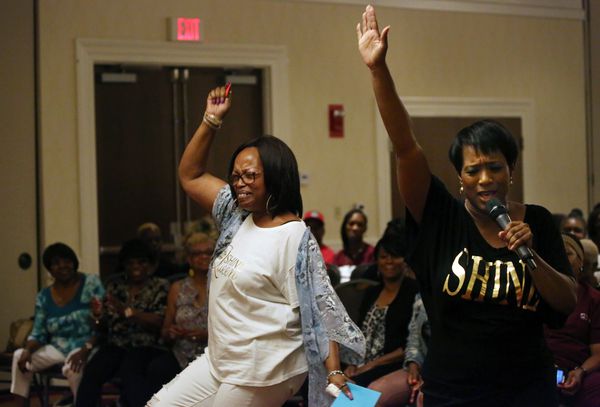 By Greg Burnett, The Plain Dealer

CLEVELAND, Ohio — Ordained minister Danita Harris wanted to inspire and encourage the 300 or so women in her audience, and help them build a better relationship with God.

So borrowing from Simon and Garfunkel’s song “A Bridge Over Troubled Water,” she urged them to let God help them over their times of trouble.

Enthusiastic applause made it clear her message was heard.

Her sermon wasn’t given in a church. It was given recently at the Embassy Suites hotel in Beachwood at a meeting of SHINE, the group she created to help women deal with difficult times by giving to others.

Yes, we are talking about WEWS Channel 5 anchor Danita Harris.

She won’t be abandoning her anchoring role on the 5, 6 and 11 p.m. newscasts. But as the founder of SHINE, she will continue to lead women to better their relationship with God.

SHINE is an acronym for Special to God; Handpicked by God; Influence others to choose God; Needed in the kingdom of God; Excel through God.

Harris came up with the idea for SHINE in 2016 when she was dealing with personal challenges.

She emphatically believes that God spoke to her and gave her instructions on what the program should be while she was sitting in a hotel room journaling.

“SHINE was birthed when I was in a really dark place in my life,” she says during an interview at WEWS. “God gave me this idea when I was trying to figure out some things personally that were going on with me. I was trying to seek God for my own personal stuff. I needed to shine.

“I was sitting in my hotel room alone, journaling. I used to take a weekend respite to clear my head. As I started to write, God told me, ‘You are going to start meeting with women once a month.’ In my journal, I continued to write the meetings will start in November of 2016. I was also told, ‘You need to let my daughters know that no matter how dark their issue, they still have the ability to shine.’”

She had some concerns about the task because of her anchor job, as well as being a mom to a 9-year-old son, a job she takes very seriously, she says.

Social media played a large role in getting the word out quickly. The message Harris put out was brief, with a time, date and location, she says. Around 100 women responded.

On Nov. 6, 2016, she had her first meeting at the Hyatt Place hotel at Legacy Village in Lyndhurst.

The gatherings are held from 9:30 a.m. to noon on most first Saturdays.

The crowd normally consists each month of women from all economic backgrounds. They are as young as 16 and old as 93. Everyone’s welcome, and Harris is seeing more diversity, she says.

If you think these are women with psychological issues, such as low self-esteem and depression, you would be right. But some are in a financial crisis, or just need to have a feeling of belonging to a sisterhood.

Speakers are invited from time to time to address and help the attendees. They include counselors, job recruiters, people to help with resume writing and suggestions on how to dress for an interview.

Harris figured out during her struggles that the way to emotional well-being is through giving to others. This is the mission statement she wants her group to support.

As part of that mission, SHINE, a religious and charitable nonprofit group, gives gifts to other nonprofit agencies each month.

“We try to help nonprofits that help hurting women and children,” she says. “I want to help the ones who don’t get the corporate dollars and ones who aren’t as well-known. My message is even though you are down and out, you are still needed. It’s not about giving money; just volunteering your time is helpful.”

That message has been well-received. Members often donate items they have at home, or those with businesses offer up their products for free. Participants pay $10 each month to attend, with the money going toward paying for the venue and other essentials, Harris said.

The morning starts with praise and worship and a rousing spiritual. Recently, a visitor to SHINE, Victoria Hubbard, sang “There Is None Like You.” It immediately moved the crowd to join in, swaying with arms raised.

….Continue reading the rest of the article on Cleveland.com

It's Your Time to SHINE